Last month, a few days before NASA’s New Horizons probe made its historic flyby of Pluto, I posted a GIF of it doing so to Reddit.

To produce this GIF, I wrote a Python script to process unaligned JPEG images directly from the New Horizons jhuapl.edu LORRI page. The script translates and rotates input images such that background stars in the image line up, which are then composed into a GIF. The result is a timelapse of New Horizon’s view, as if the camera were pointing in the same direction for the duration.

Back when I made the original post the code was very much a prototype due to me rushing to get the image out before the point of closest approach. I’ve since cleaned up the code, and put it on GitHub. In this post I’ll describe how it works.

The process breaks down into these steps:

I won’t cover how to obtain the input images from the JHUAPL website as this is not very interesting (although it is included in the source code). Note for this project only the short-exposure 100-150 msec images are used.

Looking at one of the input images we wish to compose, it doesn’t appear at first as if there are any background stars at all:

However, stretch the brightness 16 times and a few become visible:

Given such an input image we wish to obtain the x, y coordinates of each star. To do so we first threshold the input image:

This code picks the smallest thresholding constanting thr such that less than 2.5% of the thresholded image is white, then adds 2 to it. The resulting image is:

The idea is to make a mask such that contiguous white regions in the thresholded image correspond with stars in the original image. The value of THRESHOLD_FRACTION was chosen on the basis that 97% or more of an image is just background blackness, which is strictly darker the stars we wish to detect, so thresholding on this will remove almost all of the background pixels. Due to sensor noise there are still some background pixels which get through at this level. THRESHOLD_BIAS is chosen to account for this.

The above isn’t perfect: Some stars can have multiple contiguous regions associated with them or, as is the case above, Pluto or its moon Charon can generate multiple regions around its fringe. Having a significant number of false positives may cause problems for the next step, so let’s account for this by dilating the mask by a small amount, thereby joining up nearby regions:

This gives the following:

At this point we assume each contiguous region is a star. This obviously isn’t true for the regions associated with Pluto and Charon, but the next step should handle the small number of false positives adequately.

So how do we go from our mask to a list of star coordinates? We start by using cv2.findContours to extract contiguous regions:

And then mask the original image by each contiguous region, using cv2.moments to determine the centre-of-mass of the star, in terms of pixel coordinates:

Here’s the result, plotted over the stretched input image:

There are other approaches to star extraction in particular I’ve previously had success with Lang et al.’s method described in section 2.1 of the paper Astrometry.net: Blind astrometric calibration of arbitrary astronomical images, however it wasn’t effective in this case possibly due to the highly quantized nature of the brightness-stretched images. External tools are available too, such as SExtractor which I didn’t try but may be worth considering if you’re looking to do star extraction yourself.

In this step, for each input image we seek to find an affine transformation (rotation and translation only) which maps points on the first image to corresponding points on the image in question. Given a function register_pair which takes stars from two images and returns a transformation to map the first image on to the second it is easy enough to write an algorithm that behaves well: 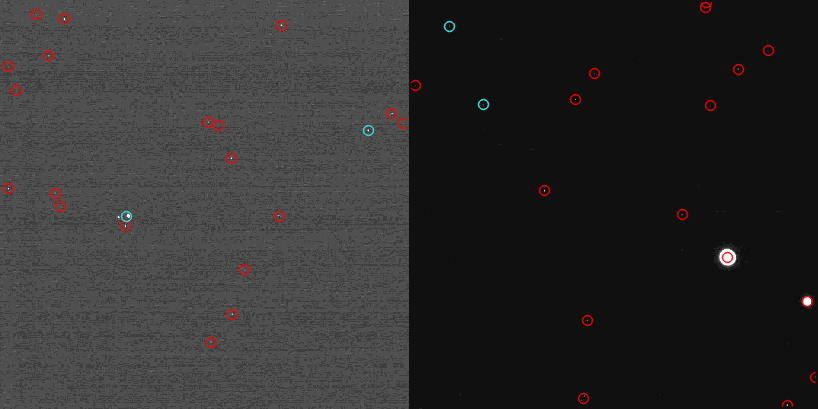 The procedure is restarted until a hypothetical correspondence is found with (approximately) equal distances between the two stars in either image:

We have a reasonable hypothesis at this point, but it could just be that the two stars are coincidentally the same distance apart in each image, and are in fact images of completely different stars. We attempt to strengthen the hypothesis by performing an exhaustive search on remaining pairs of stars (one from each image), and seeing how many pairs fit the hypothesis.

A pair is said to fit the hypothesis if in either image, the star described by the new pair has the same distance to the stars in the hypothesis. For example:

As pairs are found they are added to the hypothetical correspondence. As such, the 4th star must have the same distance to the first 3 stars in either image:

…and the 5th star must have the same distance to the first 4 stars in either image:

If there are fewer than 4 stars, the procedure is restarted. If after 100,000 restarts no registration has been found the registration is failed.

Here’s the code for the above:

The above algorithm is an example of the RANSAC method. In this case the model is just the set of correspondences found so far. We could equally have calculated an explicit transform after finding the initial 2 pairs, and used this to test for inliers, however this approach would be senstive to the initial pair being close together. In that case the transform would not provide an accurate rotation parameter, which might lead to a correct hypothesis being rejected.

The stacking phase isn’t particularly complex. It proceeds as follows:

The result is then composed into a GIF using ImageMagick.